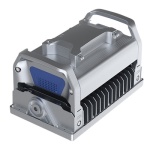 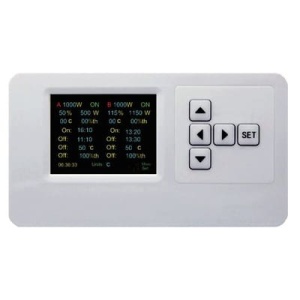 The F50 from Hortilight is an advanced LED grow light with passive cooling, equipped with many possibilities for both the hobbyist and the professional grower.

The HortiLight F50 was developed under patent by top engineers and features high-quality components, including a robust aluminium waterproof frame, MeanWell LED Drivers and Samsung Top-bin Horticultural LEDs. According to Samsung, the LH351B LEDs even have an expected lifespan of 280,000 hours!

The HortiLight F50 has an adjustable light spectrum, which links the flowering light to the power increase. As power increases, the light spectrum gradually changes from growth light to bloom light. Power Spectrum Control makes optimum lighting in every phase of plant development very easy.

The PSC control can be connected to a PWM control computer. Advanced control options such as Dali, DMX or Zigbee are optional. Please contact us for more information.

If the HortiLight F50 is used as a stand-alone unit, a remote controllable HortiLight LED Controller can be used to operate the Power Spectrum Control and set the lighting schedules.

Unlike standard LED grow lights, the HortiLight F50 requires no maintenance. The LEDs are cooled passively by the aluminium frame and therefore do not need to be actively cooled by fans. Fans do attract dust and should be checked regularly and cleaned if necessary. In addition, rotating parts, such as fans, do not last as long as LEDs and will therefore need to be replaced at some point.

An additional advantage is that the HortiLight F50 is completely silent due to the absence of fans!

A top-class design with an impact-resistant and waterproof housing and high-quality components guarantees an extremely long lifespan, even under the harsh growing conditions. The HortiLight F50 therefore comes with a 3-year warranty as standard. The warranty can be extended to 5 years as an option.