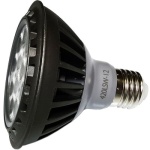 The 15W LED Spot Flower is suitable for additional lighting during the blooming period. Thanks to its powerful light penetration, supplementary lighting can be used in a very targeted way to stimulate development of the blooms.

The 15W Hortilight LED Spot Flower is equipped with 12 pcs 2W LEDs. By equipping the high power LEDs with lenses, the LED lens spot has a very powerful light penetration. This allows the spot to be used both near and far from the plants.

The 15W LED Spot Flower is suitable as extra lighting during the flowering period or as a control light. Thanks to its powerful light penetration, it can be used to stimulate the development of the blooms in a very targeted way.

The Hortilight LED lens spots are equipped with a passive cooling system and are therefore even more economical in use. However, the LED spot does require some free space, so that air can pass through the black aluminium frame to cool the lamp.

The 15W Hortilight LED Spot Flower is equipped with a standard E27 fitting and is not suitable to be operated with a dimmer.